DAVIE – With all the talk of the Miami Dolphins trading up or back for picks, they instead stayed pat at No. 11 and picked the best available player in Alabama safety Minkah Fitzpatrick.

Not only was Fitzpatrick the best available player, he was the best fit for the Dolphins secondary. During the offseason, coach Adam Gase admitted that he was not happy with the performance of his safety tandem Reshad Jones and T.J. McDonald as their skill sets mirrored one another.

“T.J. (McDonald) did a great job of being ready to go, and got in there and was physically able to do it, but we didn’t have that chemistry we’re looking for,” Gase said. “It took those guys a while to get a feel for each other.”

The addition of Fitzpatrick gives the Dolphins a true center fielding safety who is capable of mirroring receivers in the slot. At 6-foot, 204, pounds, Fitzpatrick has 4.4 speed in the 40-yard dash and is an outstanding run defender.

“He’s a Swiss Army knife,” general manager Chris Grier said. “He does a lot of things really well. … He gives your defense a chance to be flexible – his football intelligence and his love for football, he’s been a productive football player from the minute he stepped on campus at arguably one of the best programs in college football.”

There’s no question that Fitzpatrick is a much better complement to Jones at free safety compared to McDonald. The selection of will allow Miami to move McDonald to linebacker in base and sub packages, which seemingly eliminates Miami’s need to take a weakside linebacker.

Playing multiple positions isn’t easy, but Fitzpatrick was able to do just that while at Alabama due to his God-given ability coupled with supreme intelligence.

“I’d say a couple different things [allowed me to play multiple positions]: One is my athleticism. I’m an athlete so if you put me in multiple different spots, then I could adjust to different techniques. … After that, it’s just my football I.Q.”

Fitzpatrick also credited his coaches at Alabama for allowing him to move around and showcase his skill set.

“…They all just taught me a whole lot. They kind of allowed me to move around and be a chess piece as you say, or a Swiss Army knife as you say.”

Fitzpatrick racked up 171 total tackles, five sacks and nine interceptions in his career at Alabama, and Miami is hoping his versatility will benefit their defense in 2018.

Fitzpatrick – a two-time NCAA champion at Alabama sported three championship rings on draft night. He now has his sights set on the ultimate prize in the NFL – winning a Super Bowl for Miami.

“Yes they do [hand out rings for winning Super Bowls],” Fitzpatrick said. “I’m trying to fill the rest of those fingers up.” 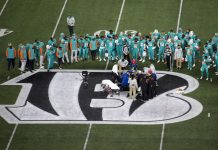