On today’s show, Rock brings you the latest from One Buc Place.  Gerald McCoy and Vinny Curry are not practicing.  Kwon Alexander and Jack Cichy are out for the Season.  Who is going to step up to fill the void at linebacker?  Will the Bucs make a move before the NFL trade deadline?  Is Gerald McCoy off limits to be traded?

Rock interviewed WWE Superstar Titus O’Neil!  Titus shares what he is doing outside of the ring with his Joy of Giving program.

NFL Playoffs: Bengals won the AFC North and are ahead of schedule as a title contender. But no one is overlooking Cincinnati

NFL Playoffs: Bengals host the Raiders and few thought that Las Vegas would be in the postseason. 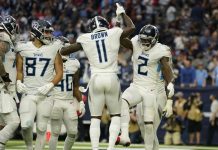 AFC Playoffs goes down to the final minutes of the regular season. Titans get top seed Steelers snag the final spot