The Sports Talk Florida and Bucs Report Pregame Show will get underway this evening at 5:30 pm to 8 pm with Ray Kennedy and Jim Williams hosting the most extensive and best live look at tonight’s primetime showdown with the Saints as Tampa Bay hopes to lockdown the NFC South title and a place in the NFC Playoffs. They will welcome sports business expert Evan Weiner to talk about the NFL and the new COVID 19 rules, Winners and Whiners lead handicapper Chris King to talk not only about the game this evening, but about the playoff run, James Cannida best known as Big Game James the former Bucs and Colts defensive star along with Sporting News columnist Bill Bender plus Sports Talk Florida Bucs beat reporter Michelle Saban who will be reporting live from Raymond James Stadium.

You can count on one hand the amount of games that the Tampa Bay Buccaneers have lost this year. So an opportunity to exact revenge for one of those losses doesn’t come around very often. That’s the opportunity the Bucs will have this week when they host the New Orleans Saints.

The last time these two teams met it was a 36-27 Halloween defeat in New Orleans. Tom Brady threw a pair of interceptions including a late pick six to seal the game. However, that seems to be a very different Bucs team than the one we’ve seen in recent weeks. The Bucs have won four in a row and are playing much more polished than they were early in the season.

The Saints have looked like a very different team since the last time these two met as well. They are just 1-5 since that big win over the Buccaneers. Now with their playoff hopes fading away, the Saints are trying to scratch and claw their way to the postseason after starting the year 5-2. Here’s what you need to know about the current version of the New Orleans Saints.

It was unfortunate that Jameis Winston suffered a season ending injury the last time these two teams played. It’s no coincidence that the Saints season has spiraled down the drain since that time. Now it will be long time special teams star / tight end / wide receiver / quarterback Taysom Hill to lead the offense.

Hill has thrown for 495 yards with 2 touchdowns and 5 interceptions in limited action this year. He has also rushed for 201 yards and a pair of touchdowns this season. Hill is a very impressive athlete who can do damage in the dual threat quarterback role. Keeping him contained in the pocket will be critical for stopping this Saints offense.

Despite the losses and ineptitude with the Saints offense, the defense is still a respectable unit. Led by Demario Davis, Cameron Jordan and Marshon Lattimore along with a cast of quality players surrounding them, this defense is essentially as good as it’s been in recent memory.

Holding the Bucs under 30 points is no easy task. Intercepting Tom Brady multiple times in a game might be even more difficult. This Saints defense managed to do both the last time they played. Despite this Saints team seemingly falling apart, the defense has still held their opponents under 30 points all but twice this season.

It seems like a forgone conclusion that the Bucs will win the division this year. However, there feels like some poetic justice to take that crown by knocking off the defending champions. The passing of the torch, so to speak. That’s what’s on the line for these teams this weekend.

The Saints offense has struggled with no dependable quarterback. They still have Alvin Kamara and a defense that causes problems, so this isn’t a team that can be taken lightly. Expect a typical hard fought NFC South divisional battle in this one between two teams that want to beat the other in a big way. 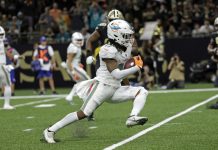 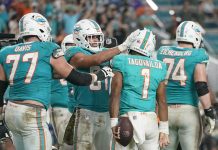 Monday Night Football: The streaking Dolphins can take a big step toward the playoffs and hurt the Saints chances with a win.