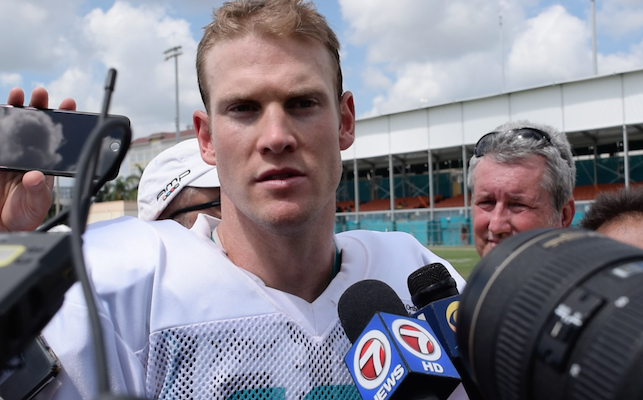 In years’ past, Ryan Tannehill has been criticized for conservative play as he’s been far too impetuous to hit his check-down receiver as opposed to pushing the football down the field. Tannehill finished 21st in the NFL in yards per passing attempt in 2015 with a meager 7.18 yards. In 2016 he saw his yards per attempt jump to 7.70 which was good for 8th in the NFL.

Dolphins coach Adam Gase has challenged Tannehill to take more risks in 2017 and it is very possible his yards per attempt could improve for the second consecutive season.

“Throughout the spring, early in training camp, coach [Adam] Gase wants me to push myself,” Tannehill said. He wants me to take chances and test my limits, test our receivers’ limits and understand . . . find those boundaries. Then the closer we get to games, the more we’ll tighten things up and start protecting the football just a little bit more. But right now we’re in the part of the preseason where . . . we’re finding those boundaries. We’re figuring out where those boundaries are and we want to push those limits.

Tannehill realizes there’s a delicate balance to achieve as it pertains to protecting the football but he also understands that he has talented players on the flanks, and he must give them opportunities to make plays.

“…I think we have a lot of talented guys on the outside and it’s finding the right balance of give them a shot, and protecting the football, that’s what it comes down to.”

Despite receiving the greenlight to take more risks, Tannehill has not been careless with the football. He recognizes that the offense must evolve and he pushing the limit is one way to ensure the offense performs at an optimal level.

“That’s just progression of the offense. It’s Year 2 and we’re fine tuning now as opposed to learning overall concepts. And that’s part of the fine tuning process: it’s testing ourselves, pushing our limits and finding our boundaries.”

Gase liked what he saw from his team last season but in his second season with the team, there are plenty of plays he believes his team will be able to execute this season that they simply weren’t able to in 2016.

“…Challenging yourselves to do things we really haven’t done in games yet; taking chances and seeing what we can do, what we can’t do. I think the receivers have done a great job of being where they’re supposed to be when they’re supposed to be there, and his [Tannehill’s] job is to just turn that ball loose and trust those guys that they’re going to be exactly where we think we