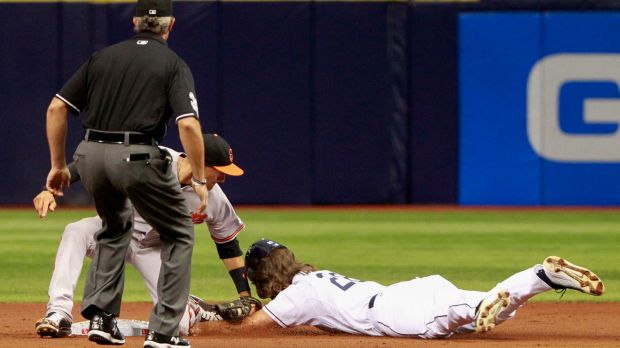 The Rays arrived in Port Charlotte in mid-February 2015 looking to put their first losing season since 2007 in the rear view mirror.

Following a disappointing 77-85 mark in 2014, Andrew Friedman left the organization to take over the Los Angeles Dodgers. Shortly after, Joe Maddon exercised an opt out in his contract and departed and eventually took over the Chicago Cubs.

The aforementioned trades were completed to improve a sagging farm system as well as to improve the roster that finished the 2014 season.  This is how the Rays stacked up prior to spring training:

This roster would be beset by injuries in spring training and throughout the 2015 season as the Rays finished with their second consecutive sub-.500 season at 80-82.

As if Kevin Cash didn’t have enough on his plate replacing long-time fan favorite and highly successful Manager Joe Maddon. He had to assimilate himself with his coaching staff, none of whom he brought with him, and had to learn a roster full of players.  A smooth transition would best be accomplished through good health during camp. This would allow Cash to determine the best roles and utilization of his final 25-man roster.

The bullpen was already a work in progress thanks to off-season elbow surgery to 2014 closer Jake McGee. The rotation was eagerly awaiting a return from health from lefty Matt Moore who had missed all of 2014 recovering from Tommy John surgery.

Alex Colome was late to camp due to a Visa issue and when he finally arrived he was shelved with pneumonia. Drew Smyly had to halt his throwing due to a shoulder injury. Alex Cobb departed a start in mid-March which required Tommy John surgery ending his 2015 season.

Minor league options Burch Smith and Enny Romero also were out with injuries Smith, like Cobb, required Tommy John surgery. Romero suffered a back strain which put him out until the end of May. 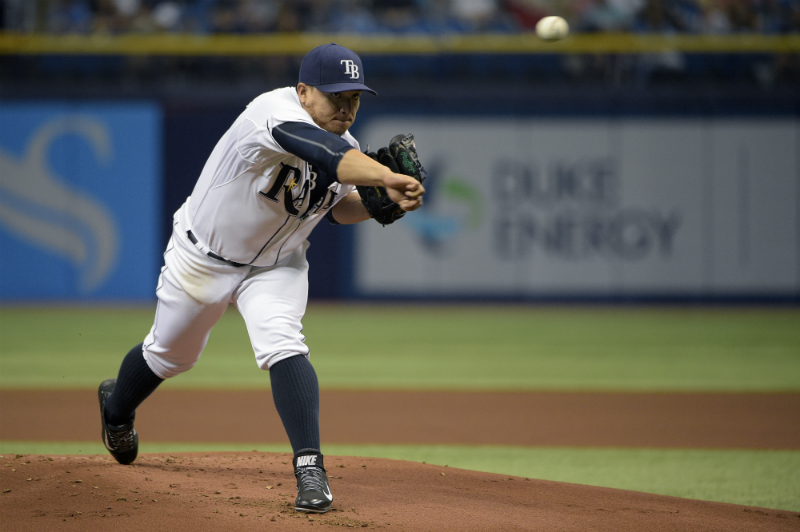 After the series of injuries to their starting staff, the rotation consisted of Chris Archer, Jake Odorizzi, Nate Karns, and Matt Andriese. The Rays filled the fifth spot on March 31st acquiring Erasmo Ramirez from the Seattle Mariners in exchange for lefty Mike Montgomery.

Other than Nick Franklin, who strained his oblique near the end of camp, the position players were relatively unaffected by the injury bug. That was until the opening of the 2015 season.

John Jaso walked to lead of the season but was thrown out trying to steal second. On the play he injured his wrist and wouldn’t return to the lineup until right before the All-Star break. The same night, James Loney strained his oblique forcing him to miss the next three weeks.

Despite Injuries, April A Success:

By the end of April the Rays had placed a Major League leading 13 different players on their disabled list. In the 20-years prior, only one team (Texas with 13 in 2014) had put that many players on the disabled list in April.  Despite the injuries, the Rays finished April with a 12-10 mark.

To cover for the injuries the Rays were utilizing a lot of rookies. They had already used a major league leading 10 rookies in April and had six on their roster. Alex Colome was coming off the disabled list and would be the 11th rookie to play for them in 2015.

They also were using a bullpen by committee approach to close games. A total of five players had recorded a save: Brad Boxberger, Ernesto Frieri, Kevin Jepsen, Steve Geltz, and Matt Andriese.

The ‘pen had been hit especially hard by injuries. They were already thin from the left side with the injury to Jake McGee and the subsequent trade of Mike Montgomery to the Mariners.  Jeff Beliveau, coming off a strong 2014 performance, was shelved for the year after shoulder surgery. C.J. Riefenhauser was placed on the DL with a left-shoulder injury.

The first significant move of the 2015 season came on April 27th when the Rays designated for assignment Grant Balfour after claiming Xavier Cedeno off waivers from the Los Angeles Dodgers.

Balfour, appeared in just six games working 4.1-innings allowing 3-earned runs. . “I felt my stuff is still there. I don’t have the same fastball I had a couple of years ago.” Balfour said. “I’ll just have to figure that out. Maybe I need the rest. Maybe it will do me the world of good because I don’t hurt. The arm felt really  good.”

Cedeno had appeared in five games with the Washington Nationals posting no record and an ERA of 6.00 (2ER/3IP).  After being designated for assignment by the Nationals he was claimed by the Los Angeles Dodgers but never appeared in a game.

Still Competitive In May:

The Rays (26-25) had a losing month in May (14-15) but ended the month in a first place tie with the New York Yankees.  They added infielder Tim Beckham and outfielder Desmond Jennings onto their disabled list but got several players back.

The Rays had overcome a lot to remain competitive through the seasons first two months. They sent 15 players to the DL (17 stints), the most in the majors. The club entered June with a total of 10-players on the DL.  Four rookie pitchers accounted for a major league leading 20 starts. No other team in MLB had used four rookie pitchers.

One rookie that was leaving an impression on the Rays was Joey Bulter (more on Butler’s journey to Rays here).  He had hit his first big league homer off Clay Buchholz in his second start with the Rays and continued to hit through the month of May.

His .342 average (25-for-73) in May was tops among MLB for rookies and a Rays rookie record for May. He also led all AL rookies for the month with a .548 slugging percentage and a .925 OPS. He tied the franchise rookie record with 4-hits against the Baltimore Orioles on May 31st.

They were in first place in the AL East and had gotten there thanks to their pitching staff. The staff had allowed 244 runs, the fewest after 70-games in franchise history. They had allowed 2-runs or few 35 times in the first 70 games, most by an AL team in the DH era (1973).

Unfortunately, the offense was still an issue, scoring just 264 runs. The second fewest after 70-games in franchise history (2014, 255).

Without an offense, the Rays were relying far too much on their pitching staff. Their bullpen had to record a save in all but eight of their 40 wins. They were on pace for 74 saves which would break the 1990 White Sox’s ML record of 68. The ‘pen led the majors with 238.2-IP. Their 227 relief appearance trailed only Joe Maddon‘s Cubs (230) in the majors.  By the end of June, the Rays had used 26 pitchers, breaking the club record of 25 (2006). The 21 relievers used were just two shy of the club record (2004).

Injuries still were an issue in June. Jake Odorizzi went on the 15-day disabled list with a strained oblique.  Tim Beckham was out with a strained hamstring.  Andrew Bellatti was lost to a shoulder injury. Ernesto Frieri was released on June 2nd and Bobby Wilson was designated for assignment on June 12. The Rays also traded minor league prospect Kyle Winkler to the Los Angeles Angels for first baseman Marc Krauss. 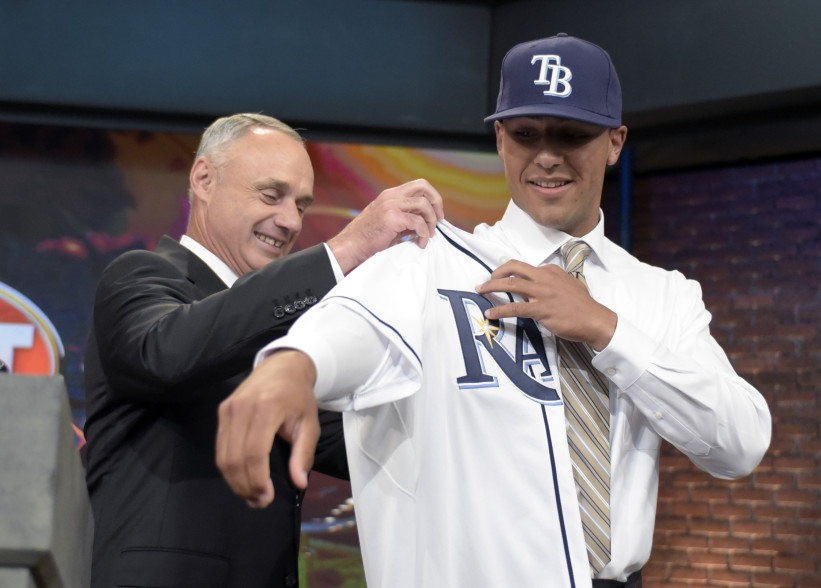 The Rays held the 13th pick in the June draft and selected outfielder Garrett Whitley out of Niskayuna (N.Y.) High School.  Whitley, currently is ranked as the Rays’ 10th best prospect by MLB.com.

The Rays, who were 40-30 on June 20th, slipped badly in July going 9-16 and ended the month with a record of 51-53. By the end of the month, the team had made 102 roster moves since Opening Day. Injuries continued to plague them as Asdrubal Cabrera went on the disabled list with a hamstring injury on July 12.

The Rays had scored 372 runs, their fewest ever after 104 games. Despite losing 10 pitchers to the disabled list, their 387 runs allowed were the fewest ever at this mark.

There were new arrivals to the Rays in July including Grady Sizemore and Jake Elmore. 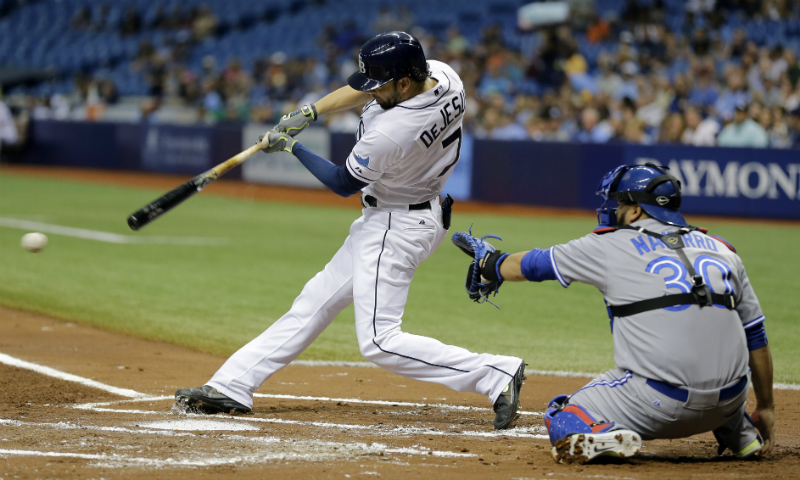 On July 28th, the Rays sent David DeJesus to the Los Angeles Angels in exchange for minor leaguer Eduar Lopez. The Angels agreed to pay the remainder of DeJesus’s 2015 salary (~2MM) plus assume the $1MM buyout on the 2016 deal.

DeJesus was often a topic of trade discussion during the 2014-2015 off-season and the rumors of a pending DeJesus trade persisted through Spring Training. He was buried on the Rays bench as the season opened but immediately found himself playing a prominent role after Opening Day injuries to John Jaso and James Loney. 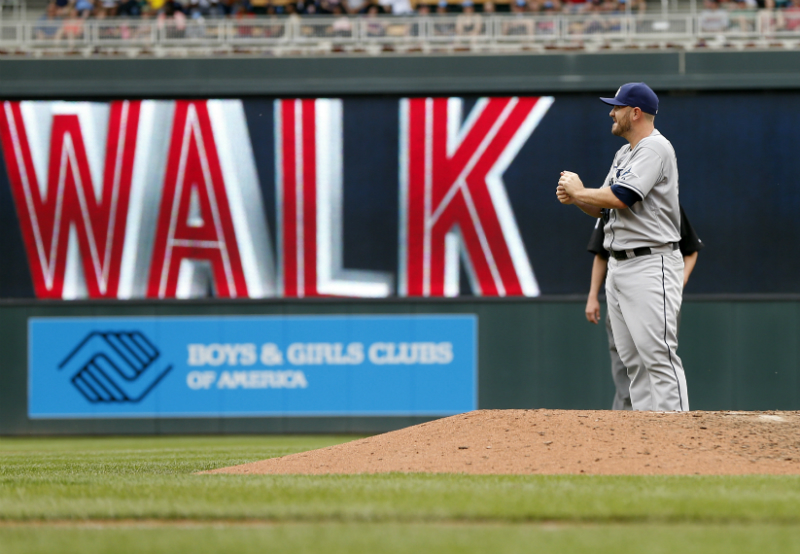 On July 31st, the Rays sent Kevin Jepsen to the Minnesota Twins for pitchers Chih-Wei Hu and Alexis Tapia.

The Rays finished August 14-13 and were within 3.5-games of a wild card spot when the month ended.

Asdrubal Cabrera was scorching hot in August batting .356/.400/.564 with four homers, seven doubles, and a triple.

As August closed, the Rays remained one of only four AL teams that haven’t been four games under .500 this season, along with the Yankees, Royals and Astros.

On a negative note, Matt Moore started the first game of the month. It was his sixth start since returning from Tommy John surgery in July. He was knocked out after giving up six earned runs in three innings. In his six games he went 1-3 with an 8.62 ERA allowing 26 earned runs in just 26.2-innings. He had only struck out 17, walked 13, and hit three batters. After the game, he was sent to Durham to work on his mechanics.

After a winning month in August to crawl within 3.5-games of a wild card spot, the month of September was not as kind. The Rays finished the month with a losing mark of 12-15 to end the year at 80-82 and were 42-42 at home.

The Rays and Orioles had to move their May series to Tropicana Field because of civil unrest in Baltimore.  Only seven other teams in the past century have played as many as 84 home games (Seattle, 2011).

It was the seventh time in eight years of the Rays era that they were .500 or better at home (36-45 in 2014).  The Rays finished with a losing record for only the second time
since becoming the Rays in 2008.

The Downside and Sub-Par Performances:

Additions To The Farm:

The Rays will continue to transform their farm system in the 2015-2016 off-season. Unbelievably, the 2016 season will once again be tainted by injuries in what can only be described as a nightmarish season.