Sports Talk Florida – N
Listen Now WHBO AM 1040
Listen Now WWBA AM 820
Home More Florida Sports MMA Two Titles on the Line at UFC 236
Facebook
Twitter
Pinterest
WhatsApp
The UFC will be at the State Farm Arena Saturday night in Atlanta, GA and have two titles up for grabs. Both titles are interim titles, with both champions in their respected weight classes being out for two completely different reasons. 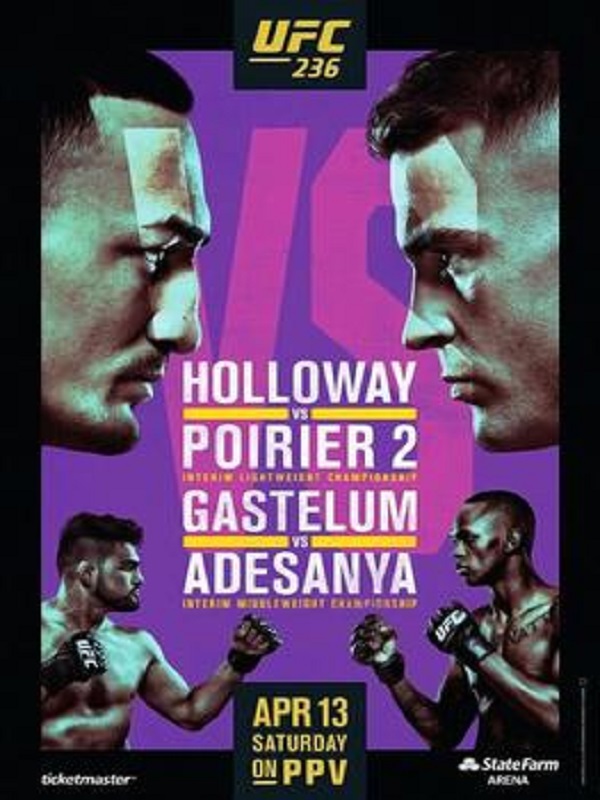 In the main event, current featherweight champion Max Holloway is making his lightweight debut in the UFC, against #3 Dustin Poirier to fight for the interim lightweight championship. The belt is for the interim belt because the lightweight champion, Khabib Numagomedov, is suspended until later this year for his actions after his fight against Conor McGregor at UFC 229. Poirier and Holloway have fought before, back in February of 2012 at UFC 143. Poirier won the fight in the via first round submission. Since then, much has changed. After defeated Holloway, Poirier went 4-3 in his next seven fights before making the move up to 155 lbs. After making the move to lightweight, he’s gone 8-1-1. Holloway has gone 16-2 since his loss to Poirier and is currently riding a 13 fight winning streak. Holloway is also a four-time featherweight champion. Both fighters prefer to keep the fight standing and like to use their striking. Poirier is a couple of inches shorter than Holloway, but has a three-inch reach advantage. Poirier packs more power, but Holloway constantly comes forward and doesn’t allow his opponents to catch their breath. He doesn’t throw a lot of heavy shots, but he constantly picks away at his opponents with jabs. A good example of that is in his last fight against Brian Ortega where the doctor stopped the fight in between the fourth and fifth round after Holloway continuously pressured Ortega, nearly shutting his left eye completely. The longer this fight goes, the more it goes in Holloway’s favor, who should have even more cardio since he won’t be pulling as much weight as he does when he cuts down to 145 lbs. This is a five round fight, something that Poirier has never done before, so he has to conserve his energy. Prediction: Holloway wins via split decision to become only the third champion to hold two belts simultaneously and only the seventh fighter in UFC history to win a belt in two different weight classes. In the co-main event, the middleweight interim champion will be crowned. #4 Kelvin Gastelum takes on red-hot #5 Israel Adesanya while champion Robert Whittaker is sidelined recovering from hernia surgery. Adesanya (16-0) is considered by many to be the future of the division. The former kickboxing champion has won fans over with his unique standing and flashy striking. He is very tall for the division at 6’4 and couple that with an 80″ reach, he makes it hard for fighters to close the distance and land strikes. Gastelum (15-3-1) on the other hand is 5’9 with a 71.5″ inch reach, but a wrestler who also has some power behind his strikes. He showed this with a knockout victory over former middleweight champion Michael Bisping in November 2017. Gastelum will have to get creative with his footwork to get on the inside of the lengthy Adesanya. Prediction: Gastelum has had cardio issues in the past and tends to fade into the third round. Adesanya wins via TKO in the 3rd round, but Gastelum surprises many with early success in the fight.