The NBA of 1961-62 was still just a step above the minor league level. Philadelphia played home games in Hershey, Pennsylvania and one of the greatest nights in the history of the NBA took place in relative obscurity in chocolate town. Wilt Chamberlain scored 100 points against the Knicks at the Hershey Arena before a crowd of 4,124 people and with the barest minimum of media attention.

Chamberlain scored 100 points as the Warriors beat the New York Knicks 169-147 in a “neutral” court game in Hershey, Pennsylvania. Actually Hershey wasn’t a “neutral” court at all for Eddie Gottlieb and his Warriors. The team held training camp in the city and played games in Hershey since 1950.

The game was no big deal for people in Central Pennsylvania. Eddie Gottlieb’s Philadelphia Warriors played wherever the team could find a court like the other NBA teams in those days. Wilt played in Utica, New York and East Chicago, Indiana as well that year.

Gottlieb a few months later would sell his Philadelphia Warriors to San Francisco investors for $850,000 and the team headed west. Philadelphia was without an NBA team in 1962-63.

Hershey was just another “home” court for the Warriors and Philadelphia wasn’t the only team playing “home” games in someplace other than home in 1961-62.

The Celtics played some home games in nearby Providence, RI, the Cincinnati Royals farmed out some home dates to Dayton, Louisville, Kentucky and in Indiana in Indianapolis and Evansville. The Chicago Packers played a game against the Warriors in an East Chicago high school, and also had games in Moline, Illinois, Green Bay and Syracuse had home games scheduled in Les Harrison’s old market in Rochester and in Utica, NY. Detroit was still playing games in Fort Wayne. The Lakers played home games in the Pacific Northwest in Seattle and some games in Minneapolis and Morgantown, West Virginia as well as College Park, Maryland. The NBA went whenever an owner thought he could make some money. Hershey was a spot where Gottlieb felt he could make some money.

In 1962 Franklin Mieuli purchased the Philadelphia Warriors and moved the team to San Francisco.
Mieuli had some financial difficulties in 1964 and in 1965 and traded Chamberlain to the Philadelphia 76ers, the former Syracuse Nationals, for three players and more importantly he received about $150,000 which helped the Warriors franchise.

Wilt’s NBA has nothing in common with today’s NBA except the initials NBA. 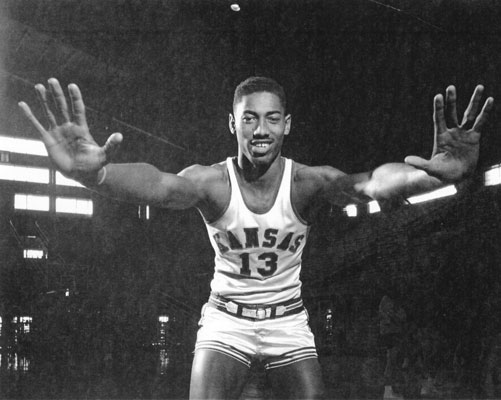